Good ideas always come back. You don't forget about them. They sit in the corner of your mind, craving your attention. For me, Should I Use? was one of those ideas. This is the story behind the idea, building it, and finally releasing it.

Should I Use? is a web application that aims to help developers evaluate what JavaScript packages to use based on a baseline set of criteria.

The idea came to me years ago while using Can I use..., an indispensable resource for identifying which features are supported across browsers and versions. With the expanding popularity of JavaScript — and the explosion of third-party packages released on NPM — I felt a significant need for a tool to help evaluate which packages to use in projects. But instead of building it, I sat on it, waiting for someone else to build it.

But it never happened.

I was talking with a few of my coworkers at Differential, explaining the idea stewing in my head for years. To avoid the headaches of releasing it under my personal brand (feedback, maintenance, support, etc.), I spoke with folks at Differential about releasing under Differential's brand.

Before I got the "green light", I decided to finally get it out of my head and build a very basic MVP of the product. I spent every spare minute I had building it. And once I received the official "green light", I built a more refined first version, opening up an Alpha version for internal testing. After getting feedback, I iterated and released the Beta. The feedback slowed, and we made plans to polish and officially release the v1.

It's actually been live for some time, but we're officially announcing it, which is why I'm talking about it here and now.

I'm incredibly thankful to work for a company that invests in passions that align with the overall company vision. It's been a blast to build it, get feedback, iterate, and put something out into the world that will (hopefully) help developers everywhere.

While this is a tool for helping developers evaluate which packages to use, I hope, too, that it helps the open-source community by identifying projects in need of additional support. We're looking at more ways we can promote those aspects within the app. Stay tuned. 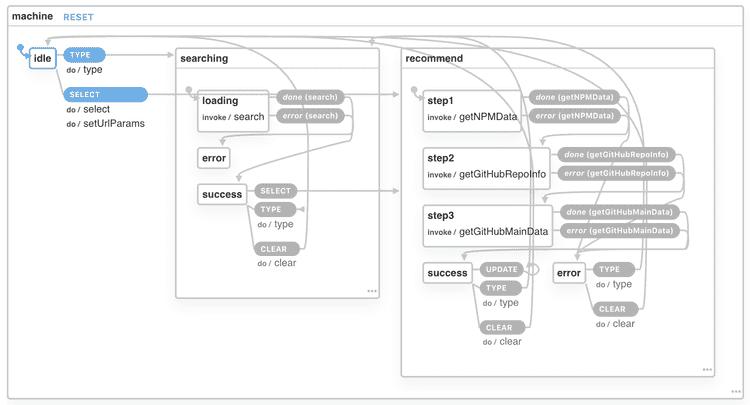 This is the state machine, visualized courtesy of XState and its killer visualizer.